Jaguar's highest-selling SV product is even more desirable than before.

The facelifted Jaguar F-Pace made its appearance earlier this year, boasting revised styling elements, an upgraded interior, and a powerful inline-six engine with electrical assistance. For the enthusiasts, we knew Jaguar was cooking up a refreshed version of the high-performance F-Pace SVR when we heard it being thrashed around the Nurburgring, and now it has finally arrived.

The previous F-Pace SVR was hardly a slouch, but the new one is even quicker thanks to a greater torque output than before. It also receives a tweaked appearance, making one of the most stylish SUVs even prettier than before. The pictures shown here are of the European model.

We'll start beneath the sultry skin, though, since this ultimately is an SVR-badged Jag. Although retaining a 5.0-liter supercharged V8 engine with 550 horsepower, the new SVR now generates 516 lb-ft of torque, up from 502 lb-ft before. That may not sound like much, but it crucially drops the 0-60 mph sprint time to below the four-second mark at 3.8 seconds.

Various other performance tweaks have been made to coax the most out of the V8 and the eight-speed automatic gearbox. For instance, Dynamic mode receives special tuning and Dynamic Launch is a new feature; the latter system minimizes any drop in power to the wheels when gear changes are executed and helps to boost acceleration.

The adaptive damping suspension and steering have both received some attention, contributing to enhanced dynamics and a superior low-speed ride. Improved brakes are thanks to the fitment of an Integrated Power Booster.

Outside, the F-Pace SVR not only gets a more modern appearance, but the new front bodywork has lowered drag and reduced lift by 35 percent.

New vents and apertures are partially responsible for these changes, while there are new LED DRLs and headlights, too. The SVR rides on new 22-inch forged alloy wheels in Gloss Narvik Black with Satin Grey inserts. It remains one of the sexiest SUVs on the market.

Climb inside and you will be greeted by a cabin with better materials and the brand's latest Pivi Pro infotainment interface. It supports over-the-air updates while the driver benefits from a 12.3-inch HD display and a new 11.4-inch HD curved glass touchscreen. Door inserts in Alcantara and available semi-aniline leather sport seats complete the look, while a new SVR steering wheel houses zinc-alloy shift paddles.

Jaguar has been able to incorporate the latest technologies by moving to its new Electronic Vehicle Architecture (EVA 2.0).

Pricing for the upgraded F-Pace SVR has not yet been announced, and neither has an official on-sale date, but this information should become available soon. 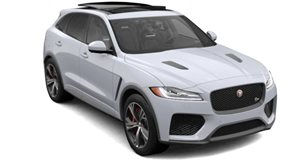 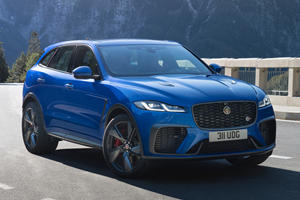