Meet The World's Most Capable EV Pickup Truck And SUV

The Bollinger B1 and B2 have arrived.

Before Tesla has even revealed its high-anticipated pickup truck, rumored to be called the Model B, the company faces stiff competition from Rivian with its R1T. To add even more competition into the mix, New York-based automaker Bollinger has been working on an electric SUV and pickup truck called the B1 and B2. Bollinger has already shown off what the B1 and B2 will look like in prototype form but now the company has revealed the production versions along with all of the juicy specs.

Both models share a 120kWh battery pack mated to four electric motors (one for each axle) creating a four-wheel-drive system. Bollinger says the total output is 614 horsepower and 668 lb-ft of torque, which is good for a 0-60 mph time of 4.5 seconds, a top speed of 100 mph, and a 200-mile range.

These are some seriously impressive figures and Bollinger's batteries are more than just quick out on the road. Both battery packs offer 220V charging via a household socket or fast charging using a CCS port. The former can charge the battery in around 10 hours while the latter takes just 75 minutes.

Unlike a Tesla or other EVs like the Audi e-Tron and Jaguar I-Pace, the Bollinger B1 and B2 place zero emphasis on luxury and instead focus on utilitarian pursuits like off-roading and cargo capacity. Both models will rival a Land Rover Defender in off-road capability with the B1 offering a near 50:50 weight distribution and approach and departure angles of 52 and 43 degrees (besting the Defender). Each is also extremely capable with payloads of 5,201 pounds, towing capacities of 7,500 pounds, and 15-inches of ground clearance.

Since there is no engine or transmission, Bollinger has created a patented passthrough which runs the length of the car. With the rear seats removed, Bollinger says the B2 pickup could carry 72 sheets of 4 x 8-foot plywood. The rest of the interior is equally utilitarian with little more than a few switches and a handful of gauges. There are also removable glass panels in the roof to create an open driving experience.

Bollinger is now taking reservations for the B1 and B2 with production set to begin in mid-2020 and deliveries to begin in early 2021. There is still no word on pricing, though an announcement should be made towards the end of 2019. 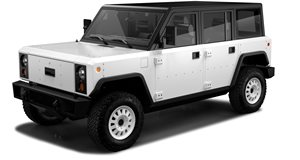