Toyota is one of the world's leading authorities on using hydrogen power for automobility. While two generations of Mirai hydrogen fuel-cell vehicle have proven the efficiency of such a fuel, the brand recently started testing using combustion in an altogether different way, and one that sounds absolutely epic. Naturally, there are many other benefits, but Toyota is really becoming an enthusiast brand once again and is even racing a hydrogen-powered Corolla. As you may have noticed, the Toyota GR Corolla is very similar in layout to the GR Yaris, and now it seems that the smaller of the two is borrowing from its big brother instead of the other way around. That's because the Japanese automaker has just shown us a concept version of the GR Yaris that also runs on hydrogen

The Japanese giant says that the hydrogen fuel itself, the fuel tanks, and the refueling process for this experimental concept are identical to those of the Toyota Mirai. There is one key difference, however. While the Mirai uses a chemical reaction within the fuel cells to generate the energy to power the car, the experimental GR Yaris boasts an internal combustion engine with hydrogen as the fuel. Toyota notes that hydrogen combustion engine technology is still in its infancy and the automaker remains "in the early stages of conceptual development and experimentation, which started in 2017." Unfortunately, the marque also says that the tech is a way off from commercialization.

As for the engine, it is the same G16E-GTS 1.6-liter three-cylinder turbo unit as found in the original GR Yaris, only with a modified fuel supply and injection system that has been tailored to the requirements of hydrogen fuel. Hydrogen burns at a faster rate than gasoline, so you get outstanding response and an exciting sound.

"We've taken the first step to compete with and develop our hydrogen-powered engine with the mindset of taking on the challenge," says Toyota President, Akio Toyoda. "I imagine things will look a little different 10 years from now, and I hope people will look back and see how we took on the challenge with positivity and enjoyed every moment of it."

Toyota isn't the first to dabble with this, as Mazda previously ran a slew of RX-8s in Europe burning hydrogen. The gas isn't as energy-dense as gasoline, which resulted in less power, but this hasn't stopped Toyota looking into the viability further.

Those of us who still love the sound of an engine are crossing fingers and toes that Toyota can bring this tech to the mainstream market. 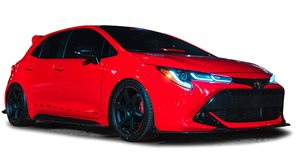