Unlike some of its stablemates, this one has four doors.

Law-enforcement agencies in the United Arab Emirates have made a name for themselves by adding some pretty high-end, exotic vehicles to their motor pools – low-slung, two-door supercars especially. But as anyone who's ever served in uniform could tell you, sports cars have limited utility for patrolling the streets. Which could be why the police in Dubai have added a decidedly more accommodating (if no less fast and powerful) set of wheels.

The latest addition to the Dubai Police motor pool is a brand-spanking-new Mercedes-AMG GT 63 S 4Matic+ – one of the most potent "sedans" on the market.

The top version of the Mercedes-AMG GT 4-Door Coupe, the 63 S boasts a 4.0-liter twin-turbo V8 good for a massive 630 horsepower and 664 lb-ft of torque. Channeled to all four wheels through a nine-speed dual-clutch transmission, it'll rocket to 62 in just 3.2 seconds, top out at over 195 mph, and lap the Nürburgring Nodschleife in 7:25.41 – faster than any other series production four-seater ever to turn a wheel in anger at the Green Hell.

Those figures would surely make it the fastest member of most any police motor pool, but not Dubai's.

The Gulf emirate has been known to add such high-powered exotics to its law-enforcement fleet as the Aston Martin One-77, Bugatti Veyron, LaFerrari, Lamborghini Aventador, Lykhan HyperSport, McLaren 650S, Pagani Huayra, Porsche 918 Spider, and much more besides. It's also acquired some pretty potent Benzes in the past, including an SL63, SLS AMG, and AMG GT R – the top version of this latest addition's two-door counterpart. Unlike all of those, however, this is a four-door, with four seats, and will surely serve the emirate's police well alongside other four-door coupes like the BMW M6 Gran Coupe and Porsche Panamera Turbo S, to say nothing of the Tesla Cybertruck it's already ordered. 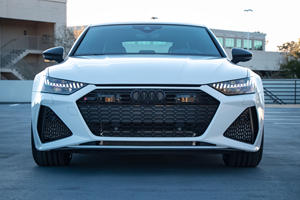