Latest images show the four-door Mercedes-AMG GT being tested in a wind tunnel before its Geneva reveal.

The four-door Mercedes-AMG GT concept was undoubtedly one of the stars of last year's Geneva Motor Show, but we'll finally get to see the final production version at this year's show. It should be wroth the wait, because the concept was an absolute stunner. In the run up to its Geneva Motor Show reveal next month, Mercedes is continuing to tease the upcoming super sedan, with new images showing it being tested in a wind tunnel to optimize the car's aerodynamics.

"Final tests will be carried out in the wind tunnel before the new member of the AMG GT family has its world premiere at the Geneva Motor Show," Mercedes teased. It's still covered in camouflage of course, but the teaser photos provide a clearer look at the four-door AMG GT's curvaceous body as it prepares to take on the Porsche Panamera. The design of the rear seems to be inspired by the AMG GT, while the rest of the design appears to take its cues from the CLS. We still don't have an official name for the sports sedan either, as Mercedes is still referring to it as the "four-door AMG GT Coupe" but rumored names include the GT4 or GTC4.

Reports suggest the GT4 will be powered by AMG's ubiquitous 4.0-liter twin-turbo V8 engine, but we don't know how much power it generates yet. In the new E63 S, the same unit produces up to 603 horsepower. There's a strong chance the GT4 range will include an electrified powertrain in the future, too – particularly as last year's concept was revealed with an electric motor in addition to a 4.0-liter V8, providing a total output of 805 horsepower. Essentially, the GT4 will replace the outgoing CLS 63, which was scrapped to make way for the super sedan. Look out for the premiere of the four-door AMG GT in production form at Geneva, which opens its doors to the public March 8. 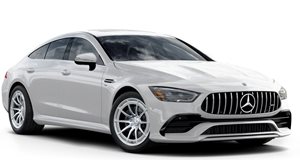