The Mercedes-AMG GT R Black Series could have over 700 horsepower on tap.

Last year, Mercedes-AMG expanded the GT family with the new GT R Pro, a new track-focused version of the already-extreme GT R. But what we're really waiting for is the new range-topping GT R Black Series, which will revive the nameplate for the first time since the SLS AMG GT Black Series debuted in 2014.

It feels like we've been waiting an eternity for the new hardcore GT R to arrive, but AMG boss Tobias Moers has confirmed it will finally launch in 2020. To help ease the wait, our spy photographers have caught a new prototype of the GT R Black Series flexing its muscles during hot weather testing in Southern Europe.

Development appears to have evolved since the last AMG GT R prototype was spotted, as this one looks noticeably more aggressive. Compared to the standard AMG GT R, the Black Series prototype has a new sculptured hood with massive air vents. Clearly, the powerful engine lurking under the hood needs copious amounts of cooling. Other changes include a unique front bumper, quad exhaust tips, and a large rear diffuser. This is going to be a very mean-looking Mercedes-AMG when the covers come off, and we can't wait to see the production model.

Whereas the regular Mercedes-AMG GT R packs a 4.0-liter twin-turbo V8 producing 577 horsepower and 516 lb-ft of torque, the Black Series is expected to increase the output to over 700 hp. That's 70 more horsepower than the GT 63 S Four-Door Coupe, which currently has the most powerful version of AMG's V8 engine, and would enable the GT R Black Series to take on the Porsche 911 GT2 RS and McLaren 720S.

Sadly, we may still have to wait a long time for the GT R Black Series to debut. According to an Instagram user who placed an order, production of the new GT R Black Series is scheduled to start in Q3 2020, so the reveal could happen in the first half of 2020. 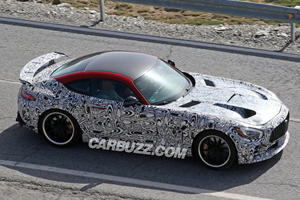 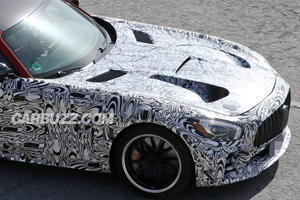 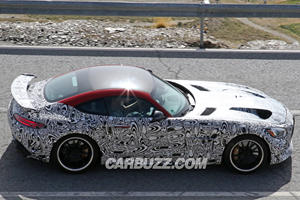 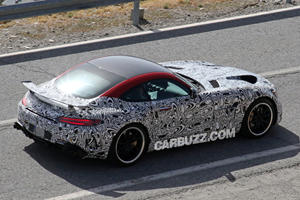 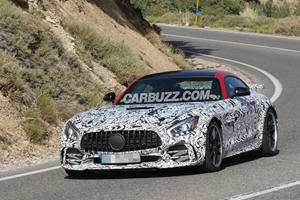