In an unusual turn of automotive journalism, MB has released its own spy shots of its upcoming 2012 SLK. Typically, spy photographers go to great lengths just to get a decent shot of an automaker's latest, but this time MB simply beat them to it. While the new SLK hasn't been fully revealed, it's clear from these photos the popular roadster has a new roof design along with a front fascia reminiscent of various other new MB models.

The updated retractable hardtop will be available with a glass roof panel as well as Mercedes's new Magic Sky Control technology. This consists of a polymer matrix embedded into the glass panel, which has magnetic particles suspended in fluid. In default mode, particles within the panel are naturally arranged in a haphazard way, which deflects light and helps to darken the cabin. When an electrical charge is added to the matrix, the particles align themselves in a way that allows light to enter.

Daimler is claiming this technology works very well in hot and cold weather conditions and that by dimming the roof panel can help decrease cabin temperatures up to 50 degrees. This effectively reduces the extra power needed for the air conditioning and climate control systems. 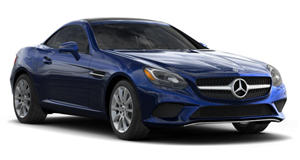 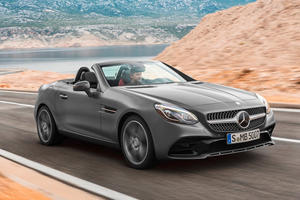 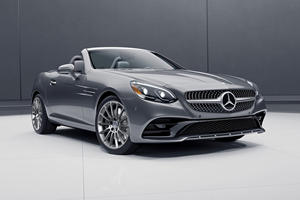 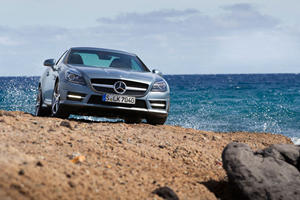