Get ready for the EQG Concept.

We first got wind that Mercedes was keen on electrifying its G-Class SUV a few months ago thanks to exposed trademark filings. The expected name? EQG, and both EQG 560 and EQG 580 were trademarked, too. It makes sense the German automaker wants to drop a battery-electric powertrain into the iconic model as part of its major EV push. What we didn't know at the time was when the vehicle will appear. Today, we might have a partial answer.

The folks at MB Passion Blog are claiming the EQG Concept will debut this September at the Munich Motor Show, formerly the Frankfurt Motor Show. A source for the information was not provided but it does make sense as this is Germany's premiere live auto show and the domestic brands will be there in full force.

Mercedes previously revealed a concept version of the EQS flagship sedan, called the Vision EQS, back in 2019 at Frankfurt. If there's a two-year stretch once again between concept and production model, then the EQG 560 and 580 should be ready to hit the road and trails in late 2023, likely as 2024 models.

The report failed to reveal any specific details regarding battery size, range, and design changes, but it's fair to assume the 4MATIC all-wheel-drive system will be standard fare. Two electric motors, one at each axle, also sounds likely. No performance-related specs are available either.

There's a good chance the EQG lineup will share much of its electrical guts with the EQS, such as the 108 kWh lithium-ion battery pack that makes 516 horsepower with the optional all-wheel drive (329 hp for the RWD version). It achieves a 447-mile range on the WLTP testing cycle. The EQG, shown here once again in our exclusive rendering, will probably have a similar figure and total curb weight of up to 5,700 pounds.

Like the current G-Class, the EQG versions won't be cheap. Today's base version only starts at around $131,000 and the AMG G63 sets buyers back at least $156,000. There's a good chance a fully-loaded EQG 580 will exceed that number. 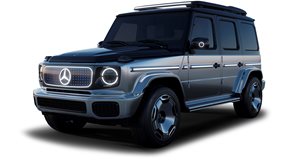