What will Mercedes think of next? Seriously, we want to know.

As car lovers, we are constantly trying to save buyers from SUVs. It's not that SUVs are inherently bad. It's just that wagons offer a lot more of what a cargo-laden gearhead wants out of the driving experience than a standard SUV. Of course some fire back by saying that sport utility vehicles can meander off road where no wagon can go, but this simply isn't true. Plenty of cars live double lives as off-roaders. If you're thinking of buying an SUV to do some serious rock crawling, then by all means be our guest.

But if you're like millions of SUV owners who will never take their cars much further than the shopping mall parking lot, then there is no reason to buy an SUV. However, if you plan on doing something in between extreme and monotonous then Mercedes may have the answer for you, just as long as you don't live in the US. It's called the Mercedes E-Class Estate All Terrain. The mouthful of words designates this wagon, based off of the game changing E-Class Estate that Mercedes debuted just a few days ago, as one that is meant for the badlands. It won't crawl over boulders like a G-Wagon 6x6, but it does have variable height air suspension that can be raised for rocky roads and lowered for aerodynamically efficient freeway cruising.

There will be additional protection on the underbody and on the bumpers as well as in the wheel arches so that the gorgeous body isn't ruined by nature. Michael Klez, the chief engineer behind the E-Class, said: "It won't be as good as an SUV off road, but it will be able to go farther than most owners will expect." Here in the US, rugged wagons aren't in high demand (wagons aren't really in any sort of demand here) but in Europe, buyers who live off the beaten path but migrate into the city like to have an alternative to tall, heavy, and fuel-inefficient SUVs. Aside from adding another off-roader to its lineup, the E-Class Estate All Terrain will also count as another niche that Mercedes has filled. Sales should start in 2017 after it hits the Paris Motor Show. 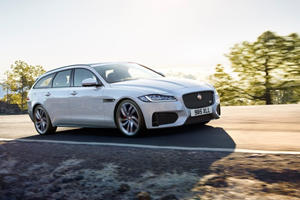