Mercedes Has A Big Change Planned For AMG And Maybach

The G-Class is also being bundled in.

Some significant internal changes are happening at Mercedes-Benz. Although an official announcement hasn't arrived just yet, Automotive News Europe reports Mercedes parent company Daimler will unveil a new so-called "business group" consisting of the AMG and Maybach brands along with the G-Class SUV. The German automaker will make this official at the Munich Motor Show this September.

The main reason for bundling the two brands and SUV (which could become its own unique sub-brand) is part of CEO Ola Kallenius' streamlining plant aimed at increasing productivity, profitability, and high-margin sales in general. The name of the group remains unknown at this time, but it'll be headed by current AMG boss Philipp Schiemer.

"Strengthening the sub-brands is an important pillar in the Mercedes-Benz strategy," a company spokesperson said. "We will not only maintain the independence, strong identities and evolved corporate cultures of the individual brands, but also further expand and sharpen them." To be clear, this is not a spin-off plan involving a separate IPO. All three will remain firmly under the control of Mercedes.

The timing of this reorganizing very conveniently coincides with the upcoming launch of the first all-electric Mercedes-AMG models later this year. The Mercedes-AMG EQS will probably debut in Munich. US sales are expected to get underway sometime next year. Full-scale electrification plans for Maybach are also well underway and it's certainly possible something will be shown at Munich in this realm.

There's are also rumors regarding a fully electrified version of the G-Class, possibly called the EQG. Full details of the plan are expected at the auto show and all current reports indicate this is a done deal. It's still too early to know whether separate AMG-Maybach-G-Class dealerships will be required, something many Mercedes dealerships probably wouldn't be in favor of doing because of the significant investment required.

Along with the AMG EQS, the successor to the AMG GT isn't too far out but it's not expected to be a pure battery-electric but rather a plug-in hybrid with a limited all-electric driving range. 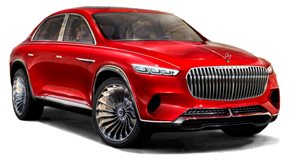