The turbo-four has a lot of applications.

Mercedes recently announced the most hardcore AMG version of its sub-compact CLA sedan, the CLA 45. It is powered by a new M139 2.0-liter turbocharged four-cylinder engine producing a monstrous 382 horsepower and 354 lb-ft of torque, which is a staggering amount of power for a four-banger. Sadly, the US won't receive the more powerful CLA 45 S, which produces an even more unbelievable 416 hp and 369 lb-ft of torque.

In the S state of tune, the M139 is the most power-dense engine in the world with 208 horsepower-per-liter. These power figures are so impressive, Mercedes believes it would be a waste not to use the engine in more vehicles. Speaking to Paultan, AMG boss Tobias Moers confirmed we will see the M139 in further applications.

Of course, the M139 will also be used in the Europe-only A45 hatchback and will make an appearance in the upcoming GLB 45. We still don't know if the US will ever receive the 416 -hp state of tune but even the 382-hp version is still impressive. "The reason [why it makes so much power] is that we're going to use that engine for further applications which are not necessarily east-west applications," Moers said, hinting at possible longitudinal use.

All of the vehicles currently slated to use the M139 mill have the engine mounted transversely for a front-biased, all-wheel-drive drivetrain but Moers statement leads us to believe the company could adopt the engine for longitudinal use, allowing for a rear-wheel-drive application.

Since the M139 is part of AMG's "One Man, One Engine" philosophy, it seems unlikely we will see it under the hood of a non-AMG car. But with mild-hybrids starting to enter the AMG range, we could see the four-cylinder paired with a 48-volt mild-hybrid system to replace the current twin-turbo V6 found in AMG's 43 models. Whatever AMG has in store for this engine, we won't have to wait long to find out because Daimler chairman Ola Källenius says the company will show "some ideas" later this year. 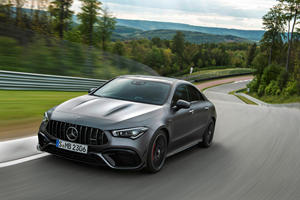 First Look
4
2020 Mercedes-AMG CLA 45 First Look Review: US Gets Shortchanged
Why can't we have the A-Class hatchback or the more powerful S model?