Reports suggest it will launch in 2022 and slot below the A-Class.

The covers finally came off the all-new 2020 Mercedes CLA at the CES show in Las Vegas this week. It's sleeker, more spacious, and more technologically advanced than its predecessor. At the show, Mercedes showcased some of the CLA's clever new technology powered by the MBUX system first introduced in the new A-Class. Currently, the A-Class represents the entry-level in the Mercedes model line-up, but that could change soon.

According to a report by AutoBild, Mercedes could be cooking up a three-door mini hatchback to slot below the current five-door A-Class hatch in 2022. It's reportedly called the A-City and will be based on a shortened version of the A-Class' platform. If it gets the green light for production, there's a good chance it will be based on the next-generation A-Class.

What isn't clear, however, is whether Mercedes intends to sell the new small hatchback in America. While the A-Class hatchback isn't sold here, it could fill the void of the Smart Fortwo as a recent report suggested Daimler could kill off the Smart brand and replace it with a small Mercedes car to rival Mini.

Mercedes' new small city car could also spawn a new compact crossover positioned below the GLA crossover. Rumors suggest it will debut a year after the A-City and be called the A-Adventure. It will be designed as an off-road adventure vehicle with raised suspension, roof rails, and body cladding.

Model Overview
2020 Audi A3 Sedan Review: A Junior Exec With Pace, But Not Space 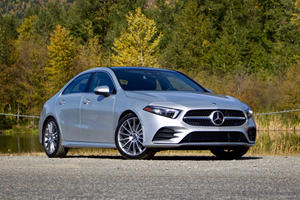