Mini Returning To Nurburgring 24 Hours With This JCW Racer

This is the first time a Mini will enter the 24 Hour endurance race in a decade.

Mini might build cutesy city cars that mostly attract those of the fairer sex, but fans of the brand will talk your ear off about Mini's motorsport exploits. The brand has enjoyed massive success on and off the track with its lightweight cars, and although it hasn't made huge headlines of late, things seem like they're about to change. Mini will return to the famed 24-hour race at the Nurburgring for the first time in nearly a decade. This modified Mini John Cooper Works is entering under private team Bulldog Racing in the SP3T class, and has been specially built for this grueling track and endurance race.

Bulldog Racing launched its Mini project in September last year and decided on a Mini John Cooper Works as the base car. This little Mini has seen some extensive upgrades over the past few months, and can now be considered a full-blown race car. Bulldog Racing added a full roll cage, a 26.4-gallon fuel tank, custom suspension, BMW M Performance brakes, a sports exhaust system, uniball bearings and plexiglass windows. The exterior now features an adjustable rear wing, a covered underbody, front splitter and an aggressive rear diffuser. The standard 2.0-liter turbocharged engine has been retained, and the eight-speed steptronic transmission features an integrated limited-slip differential which manages around 300 horsepower at the front wheels.

The car features a classic red color scheme that pays tribute to classic Mini races of the 1960s. The complete car will now undergo extensive testing at the Nordschleife and the BMW Group testing center in Miramas in southern France. "The 24-hour race at the Nurburgring puts all components of the vehicle under extreme stress. That's why we're delighted to be able to use the BMW Group Test Centre to put the John Cooper Works through its paces there," says Friedhelm Thelen, Nurburgring expert and team boss of Bulldog Racing. The driver line-up is yet to be announced, but we'll be sure to keep an eye out for this little red ring racer. 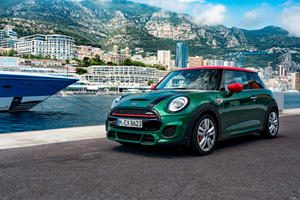 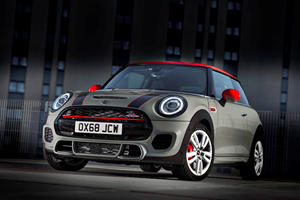