This will be the electrified off-roader's toughest challenge yet.

Last year, Mitsubishi and the military veterans' nonprofit organization Record the Journey achieved a world-first when the first adaptive athlete completed the challenging Rebelle Rally off-road event in a Mitsubishi Eclipse Cross. This year, Mitsubishi will attempt another world first by entering a 2020 Mitsubishi Outlander Plug-in Hybrid in the grueling ten-day, 1,242-mile rally event. This is the first time electrified vehicles have been allowed to enter.

If you aren't familiar with the Rebelle Rally, it's the first all-women's off-road navigational rally raid in the US and the longest event of its kind in the lower 48 states. It's been running since 2016 and features 4x4 and crossover classes.

This year, the highest finishing battery-powered electric vehicle and hybrid or plug-in hybrid electric vehicle will be honored in each class. Allowances will be made for charging the battery during the rally raid.

"The Rebelle Rally shows us what is possible when we have the courage and ambition to do more with the cars in our driveway, and we all need that inspiration now more than ever," said MMNA Chief Operating Officer Mark Chaffin. "We are thrilled to continue our support for Team Record the Journey this year with the world's best-selling plug-in hybrid electric vehicle, the Mitsubishi Outlander PHEV, and to continue to prove our legacy of quality, dependability and reliability."

Behind the wheel of the Mitsubishi Outlander PHEV rally raid SUV will be US Air Force veteran Karah Behrend, who finished second place in the crossover class in a Mitsubishi Eclipse Cross last year, becoming the first adaptive athlete to complete the Rebelle Rally.

The Mitsubishi Outlander PHEV combines a 2.0-liter four-cylinder gasoline engine and a 12.0 kWh lithium-ion battery pack to produce a combined 190 hp and 137 lb-ft of torque. Using a DC fast charger, the battery can be charged in 25 minutes to provide up to 22 miles of all-electric range. We'll find out how the Mitsubishi Outlander PHEV performs in its rally raid debut when the Rebelle Rally kicks off on October 8. The event will run until October 17, starting in Lake Tahoe, California and ends in the Imperial Dunes of Glamis, east of San Diego. If it sets the fastest time in the 2020 Rebelle Rally, the Mitsubishi Outlander will become the first electrified off-roader to finish first in its class. 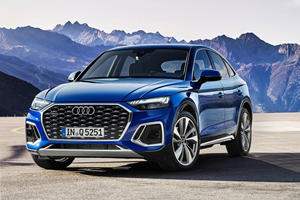