The Japanese carmaker has a clear strategy that should pay off.

Mitsubishi is working hard on playing catch up and, so far, it's been doing a pretty good job. Sales in the US are gaining and new product is on its way. Although a previous rumor suggested the Japanese brand might leave the US altogether, clearly that's not the case. In fact, plans are being made for its next-generation SUV lineup. Autocar has learned that Mitsubishi's three core SUVs, the Outlander, Eclipse Cross, and Outlander Sport will all receive redesigns, but there will be one noticeable difference: size.

An unnamed Mitsubishi source stated the following: "Today, we aren't in an ideal position, with our SUVs close in size, but in the next 18 months you will start to see a strategy that separates them out." Translation: the three models will have distinct size differences.

The redesigned SUVs will have around an extra 7.9-inches in length between each. Expect to see the Outlander get larger and the Outlander Sport to become smaller. The next Eclipse Cross will get slightly larger as well. So how is Mitsubishi able to redesign these models so relatively quickly and get them to market? Thank the Renault-Nissan-Mitsubishi alliance. It's called platform sharing.

"The good news is that the SUV is core to Mitsubishi's DNA and on that front the world is coming to us. We have a strong reputation in the market – as well as for plug-in hybrids and even electrification – and we can build on that," the source added.

Expect to see Mitsubishi further expand its plug-in hybrid tech and create full-on electric SUVs. Quite obviously, the Outlander PHEV will continue and we wouldn't be surprised to see the Eclipse Cross gain hybrid and PHEV variants as well. But what we're anxiously waiting for is a production version of the Engelberg Tourer Concept that premiered last March at Geneva.

Not only does it feature rugged good looks, but it's also equipped with a next-generation PHEV powertrain that combines a 2.4-liter four-cylinder engine with a pair of electric motors, one at each axle. Mitsubishi is no stranger to SUVs, having built icons like the Pajero (aka the Montero in the US), which won the grueling Dakar rally a record 12 times. 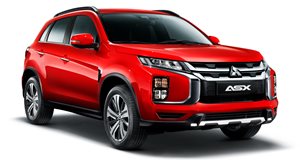