It's a tradition in the MotoGP motorcycle racing series that the rider who posts the fastest qualifying time in each season is awarded with a free high-performance BMW M car. This year, that honor once again went to Marc Marquez for the seventh year in a row, who secured the MotoGP championship for the sixth consecutive year.

Last year, the Spanish MotoGP champion was given a free BMW M3 CS, but this year's prize was a 2019 BMW X4 M Competition finished in Toronto Red Metallic. Under the hood, the BMW X4 M features a 3.0-liter twin-turbo inline-six engine pumping out 510 horsepower and 442 lb-ft of torque, allowing the sporty SUV to sprint from 0-62 mph in 4.1 seconds.

"I would like to thank BMW M GmbH for the great way in which they have recognises our performances at the track for many years, and how they reward the season's best qualifier," said Marquez. "I am a bit speechless to have received this award for the seventh year in a row. I am delighted to have been the fastest qualifier this year because it's not been easy and can hardly wait to get in the car."

"It has pretty much become a tradition to present Marc Marquez with the BMW M Award here in Valencia," said Markus Flasch, CEO of BMW M. "To win this coveted award seven times in a row, and in such a high-class field as the one in MotoGP, is an outstanding and unique achievement. Congratulations on this record run, which started back in 2013. We are delighted to be able to present him with this exclusive BMW X4 M Competition as his prize – a sporty, high-performance car and a real powerhouse, whose attributes are perfectly suited to an exceptional athlete like Marc. We hope he has a lot of fun driving it."

This is the 17th year the BMW M Award has been presented. In 2015, Marquez became the first rider to win the BMW M Award for three consecutive years before becoming the exclusive record holder in 2016 with his fourth straight victory. As part of BMW M's partnership with MotoGP, the BMW M8 also serves as the MotoGP safety car. 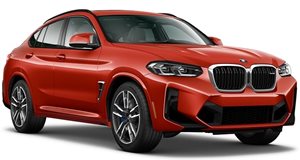