The Integra was just the start.

A new Acura Integra is on the way, and it looks like it'll be quite an attractive offering. So far, we don't know very much about it, but we know enough to determine that it will be stylish and spawn a Type S variant. Honda and Acura aren't done with bringing old nameplates back from the dead though, and CarBuzz has discovered that one of the two brands, likely Acura again, will be bringing back another name that enthusiasts will recognize, namely that of the RSX.

On the face of it, this is very confusing, as the Integra name became the RSX in the US once Acura decided that it wanted customers to recognize its naming convention as a way to identify the brand rather than just its individual models that would still be associated with Honda.

In the US, the Acura RSX was offered in regular and Type S variants, just as the new Integra will be. But Acura is quite clearly the brand that will feature the Integra name, so why has parent company Honda trademarked RSX too? One possible explanation that makes sense to us is that one of the new vehicles will be a more luxurious version of the Integra/RSX while the other will be a sportier model, but at this point, we can't confirm anything. Oddly, the upcoming Integra will become the only Acura model sold in the US without a three-letter name. Acura could be doing this simply to capitalize on the greater fame that the Integra name has over the RSX name.

A more likely possibility is that the RSX will be the same Integra we've been teased with, but will become a nameplate not sold in the US. This theory has some credibility because the trademark filing we discovered was made at an Asian patent office. This would be a similar scenario to that of Volkswagen's Jetta which was sold as the Vento in some markets. If this is the case, it would suggest that Acura is looking to make the new Integra a global product that will be sold in various markets. We'll report back once we have more info. 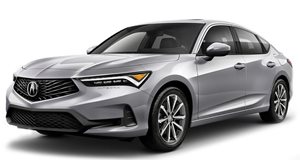