Only in an M5 would the occupants survive such a high-speed accident.

The Germans ability to build cars for the Autobahn has never been in any doubt. If you want proof, just check out this accident in which a 2012 BMW M5 crashed at 186mph without killing the driver or passengers. The driver apparently lost control as he braked and swerved to avoid a car that was joining the highway oblivious to the M5 going flat out behind it. The high-performance Bimmer then struck the road divider, bounced off and flew across the highway.

It then flipped several times before finishing in a ditch 100 meters from the side of the A81 near Tuningen, close to the Swiss border in SW Germany. The fact neither the 60-year-old driver, 20-year-old passenger, and pet dog sitting in the back seat were not instantly killed is testament to the crash and safety technology in the M5. With smoke coming out of the hood, the driver's two sons, following in an M3 and M6, quickly put out the burning engine with a fire extingusher and rescued their father and passenger who remain seriously injured in hospital. The dog was also hurt, but alive.

The A81 Autobahn, one of the longest unrestricted roads in Germany, was closed for several hours after the incident. Just goes to show that even in one of the safest cars in the world, high-speed driving is always dangerous. 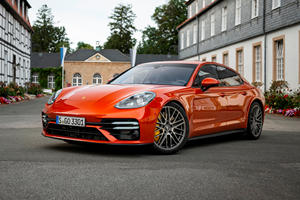