The Chevy Blazer could be getting a twin brother.

2018 should go down as the year of the revived model nameplate. This year alone, we saw the BMW 8 Series, Ford Ranger, Honda Passport, Jeep Gladiator, and Lincoln Aviator names all brought back from the dead. General Motors certainly hasn't missed out on this nostalgia bubble, after reviving the Chevrolet Blazer SUV earlier this year. As it turns out, GM may be set to revive yet another nameplate from its past, this time from its GMC brand.

GM has filed a trademark request for the name "Envoy," which was previously used from 1997-2008 on GMC's mid-size SUV offering. The trademark covers "motor vehicles, namely, sport utility vehicles, engines therefor and structural parts thereof." When we last saw the Envoy in the 2009 model year, it was a rather plain looking family hauler which was related to the Buick Rainier, Chevrolet TrailBlazer, Isuzu Ascender, Oldsmobile Bravada, and Saab 9-7X. Engine choices were either a 4.2-liter inline-six or a 5.3-liter V8 both sending power out to a four-speed automatic.

Since all of the models the Envoy was related to are no longer in production, all signs point to the new Chevy Blazer as a shared platform. The 2019 Blazer is based on GM's C1 platform, which also underpins the Cadillac XT5 and GMC Acadia.

If we are correct about a revived Envoy sharing a platform with the Blazer, we'd expect to see the same 2.5-liter inline-four and 3.6-liter V6 engines under the hood sending power to front- or all-wheel-drive. This trademark filing also comes right off the heels of another filing for the name "Enspire," which could be Buick's version of the Blazer and Envoy. 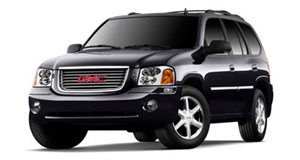