Hyundai's next EV is both high-tech and spacious.

If the Hyundai Ioniq 5 is a sign of things to come, then the Ioniq 6 should be an equally exciting electric vehicle. Earlier this week, we got a look at the Ioniq 6's luxurious interior via some rather revealing spy photos, and now a new batch of images has been captured which gives us a look at more of the details.

The pictures from the Korean Car Blog, apparently taken by CarStory, show off one or two aspects of the interior that we haven't seen before as well as close-up shots of the exterior. In front, we can see a camera that should form part of the vehicle's driver-assist technologies. The coupe-like roofline we've seen before is also very much in evidence.

Other photos show that the Ioniq 6 will have flush door handles that pop out from the body. The headlights and taillights remain hidden behind extensive cladding so it's difficult to be certain of their shape. The rectangular cutouts for the taillamps may or may not be a clue as to their real shape.

Inside, we've already seen pictures of the spacious cabin which visually seems to have loads of rear legroom. Rear occupants will also have their own ventilation outlets. A new picture of the front passenger seat shows controls to electrically move it forwards or backwards. These buttons appear to be accessible to the driver.

Previous spy shots revealed a dual-screen setup ahead of the driver for the digital gauge cluster and the infotainment system. The layout is similar to what we've seen in the Ioniq 5.

The Ioniq 6 is expected to be introduced with two powertrains, including single- and dual-motor variants. The latter will produce over 300 horsepower. In terms of range, the Ioniq 6 should be able to cover just over 300 miles. The Ioniq 6 is anticipated to be revealed sometime next year and will be followed by the Ioniq 7 SUV. 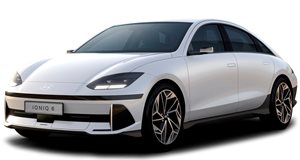 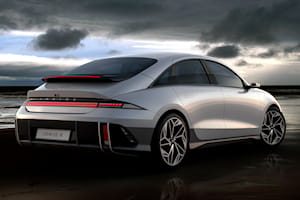