New Mitsubishi Eclipse Teased As A Crossover That Seduces Americans

This is the new Mitsubishi crossover that will sit between the ASX and Outlander rumored to be called the Eclipse.

As much as we would love to see a successor to the legendary Mitsubishi Evo sedan, it's not going to happen. Instead, the manufacturer is focusing on expanding its SUV range to appeal to the American market, and is set to debut its first crossover at the Geneva Auto Show. Ahead of its reveal, Mitsubishi has released an obligatory teaser profile shot of its upcoming crossover, representing the first of a new generation of Mitsubishi vehicles as it tries to win back its American audience.

No name has been revealed, but rumors suggest that this could be the new Mitsubishi Eclipse and that it will use a shortened version of the Outlander platform. The compact crossover will expand Mitsubishi's current SUV range, sitting between the ASX and Outlander. We get a glimpse at the headlamps, belt line and rear taillights in the teaser profile shot, but it also confirms that the new Mitsubishi crossover will take its styling cues from the EX Concept and the 2013 XR-PHEV concept, with "highly chamfered contours with a wedge-shaped belt line and a distinctive V-line in the rear quarter stemming from the forward-slanted C-pillar and the chunky, muscular rear fenders."

It's hard to get excited about a new Mitsubishi crossover knowing that the Evolution is being laid to rest, but it makes perfect business sense from the manufacturer's point of view to join the booming crossover market. The automaker has high hopes for its new crossover too, having previously said it "will be the best vehicle Mitsubishi has ever produced." We'll find out if it lives up to that bold statement in a few months when Geneva kicks off on March 7. 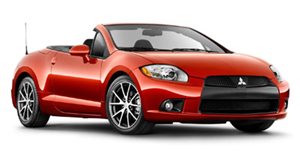