Next Dodge Challenger And Charger Ditching Canada For America

They've been built in the Great White North for years.

Not everyone will know that both the Dodge Challenger and Charger are built in Brampton, Ontario, Canada. They have been ever since the nameplates were revived in 2008 and 2005, respectively. Both the Chevy Camaro and Ford Mustang are built south of the border here in the US.

However, Automotive News Canada reports Stellantis' muscle cars will switch to a different production facility in the US sometime next year. In all likelihood, the current generation models will be retired at around that time, along with the Chrysler 300. An all-electric muscle car, a first for any automaker, is due in 2024. Details remain scarce.

Heck, we don't even know whether it'll be the Challenger or Charger (or something else). But chances are there will not be a 300 successor, which should come as little surprise since Stellantis rightly views the Charger as having greater potential. The automaker has not officially confirmed production is moving to America, but industry analysts who are familiar with the Stellantis portfolio predict this will happen.

But what will be built at Brampton Assembly in their place? Losing both vehicles is very significant for the facility given their high profitability. It is unlikely Brampton will be shut down after 2023 but will instead build another Stellantis vehicle(s). If so, it'll probably be electrified.

Stellantis recently announced a $35 billion electrification and software development investment through 2025 that will go beyond just the EV muscle car. Future SUVs and crossovers are included in the mix as well. We would not be surprised to see Brampton build a new EV crossover, for example. A total of 98 percent of the company's lineup will be electrified (hybrids, plug-in hybrids, and EVs) by 2025.

The next-gen Challenger and Charger are expected to retain their combustion engines combine with a PHEV setup, at least initially. Eventually, the mysterious all-electric muscle car's powertrain will replace that. There's no point in arguing. Stellantis has decided. It's a done deal. 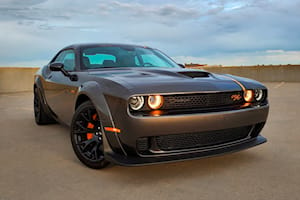