What's next for the GT-R and Z car?

The sports car segment is a niche one, as any mainstream automaker will tell you. Sports cars are typically not very profitable, although the Mazda MX-5 Miata may be one of the sole exceptions to this. To help reduce costs, some automakers have joined forces for their sports cars, such as Toyota and Subaru (86 and BRZ) and Toyota and BMW (Supra and Z4). But what about Nissan, the Japanese automaker with a long and glorious sports car history. Its two aging offerings, the 370Z and GT-R, will have eventually have successors, but will Nissan join forces with another brand to make that happen?

Motor1 has confirmed that Nissan prefers to stick with its go at it alone approach. "It's in the Nissan DNA and its heritage to keep everything in house," a company spokesperson stated.

Remember, Nissan is part of the Renault-Nissan-Mitsubishi alliance, so it automatically has available partners if it so chooses. But why bother doing so if Nissan already has plenty of in house knowledge and capabilities? Furthermore, there's the Nismo performance division and Nissan has made it known it's keen to increase Nismo's future involvement.

At New York last month, the 50th-anniversary editions of the 370Z and GT-R premiered, and not only do they commemorate a half-century of the brand's sports car heritage, but they also somewhat symbolize the end or nearly the end of the current generations. Replacements need to come sometime. Question is, what type of powertrain can we expect?

Nissan's chief marketing officer for North America, Natalie Roe, made clear the automaker's performance enthusiasts are not wild about pure electrification. "I think you have both, a 'purist' and an 'EV' (performance car). I don't think we're going to completely get away from the internal combustion engine, at least for a while."

So all those past rumors claiming the next-gen GT-R will be all-electric may no longer be valid. The next GT-R could very well be a hybrid or plug-in hybrid, but it's sounding more and more like future owners will still be pumping gasoline. 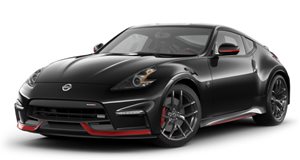