Not All 2019 Honda Passports Are Equally Safe

The Insurance Institute for Highway Safety has crash-tested the 2019 Honda Passport to see how it stacks up against the competition and awarded the midsize SUV with a 2019 Top Safety Pick, though the award only applies to models built after June 2019.

Based on the Honda Pilot, which also earned a Top Safety Pick rating, the midsize SUV earned "good" ratings in all crash tests apart from the passenger-side small overlap front test, which scored an "acceptable" rating. This meant the midsize SUV missed out on the highest Top Safety Pick+ award, which requires "good" ratings in all five crash tests.

The Passport's two available headlight systems also prevented it from earning the highest safety rating, as both earned "acceptable" ratings for models built after June 2019. This is still an improvement on earlier models, however, as Passports built before June 2019 were rated "poor" by the IIHS. High-beam assist now comes as standard, which helped improve the safety rating of the Honda Passport's headlights.

As standard, the 2019 Honda Passport includes a forward collision warning system that was rated "superior" by the IIHS. During testing, the system avoided a collision at 12 mph and reduced its impact speed by an average of 12 mph in the 25-mph test. Six other 2019 Honda models have earned a Top Safety Pick award by the IIHS, while the 2019 Insight earned the highest Top Safety Pick+ award. In addition to the forward collision warning, all 2019 Honda Passports come with automatic emergency braking, lane keep assist, and road departure mitigation assists as standard as part of the Honda Sensing suite.

Starting at $31,990, the 2019 Honda Passport is available with four trims, all of which are powered by a 3.5-liter V6 that produces 280 horsepower and 262 lb-ft of torque. A nine-speed automatic gearbox is standard and Sport, EX-L, and Touring trims feature front-wheel- drive as standard, while all-wheel drive is standard on the Elite model and optional on all others. 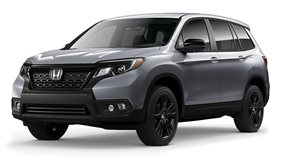