Will be manufactured at Spartanburg, SC plant.

Though details are still limited, BMW is set to announce the production of its large X7 SUV at an official event at their South Carolina plant later today. The large Mercedes-Benz GL-battling sport utility is expected to offer three rows of seats, and also take on competition from Cadillac's Escalade and Lincoln's Navigator. The announcement is set for Friday at 4 PM, and will take place at the Spartanburg plant where production of the vehicle will commence.

The Spartanburg factory already manufactures approximately 350,000 X models per year, including the popular X5 SUV and the smaller X3 and X4 crossovers. The X7 has been on the drawing table since 2008, but was dropped after the global economic crisis hit. Now, BMW is sure that it can sell enough 7s to justify the production, and will be increasing the plant's output to 400,000 units per year. Expect the X7 to hit American roads in 2017 or 2018. 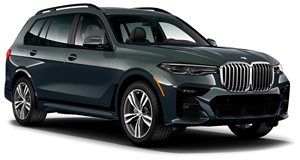