Time to rethink an icon.

The Mercedes-Benz SL-Class dates back to the iconic 300 SL race car of 1952. The 300 SL Gullwing later debuted in 1954, a car that many consider the first-ever exotic. The 300 SL Roadster arrived in 1957 and the model has remained a convertible ever since. However, in recent years the SL has been suffering from an identity crisis, with the Mercedes SLS AMG and then the Mercedes-AMG GT making life difficult for it. The German automaker had a choice to make: kill the SL or redefine it. It wisely chose the latter.

Mercedes-AMG has officially released the first batch of photos showcasing pre-production prototypes of the next-generation, AMG GT-based SL Roadster. Yes, you read that right. Mercedes-AMG. The high-performance division has been assigned with the challenging and rewarding mission of the new SL's overall development and reinterpretation, which Mercedes says will be "returning to its roots."

With indoor work, made up of digital testing and simulator trials, now complete, it's now time to hit the road. A wide range of dynamic testing is now underway beyond the company's technology center in Immendingen, Germany. Public roads are now part of the prototypes' playground. With testing now in full swing, we expect to see a reveal by the end of the year. A 2022 launch is entirely possible.

Our spy photographers also recently caught some early-stage prototypes out testing, which revealed this new SL is ditching the hardtop roof in favor a lighter fabric soft top. The overall design, though still heavily camouflaged even in these official images, seems to a show a more dynamic-looking car than its somewhat dull predecessor.

The headlights look narrower than those on the AMG GT. Look closely and winglets can be spotted at either side of the lower front bumper. There's also some nicely curved sheetmetal running along the bottom of the doors. Out back, thin taillights are clearly visible, though like up front, the camo is doing a good job hiding the final look. Rear air vents and a quad exhaust system are easy to spot. As for the soft top, well, it's definitely there, though it's being kept closed for now.

Expect a version of the 3.0-liter straight-six engine with EQ Boost hybrid tech to be found under the hood, along with the company's 4.0-liter twin-turbo V8. A hybrid variant called the SL73 is also expected, possibly with upwards of 800 hp.

More next-gen SL details should be coming in over the next few months, so stay tuned. 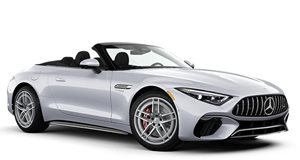 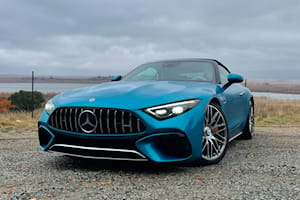 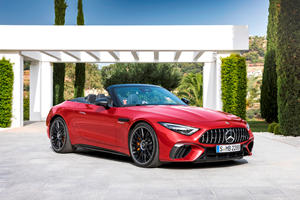