One Of Scion's Original Cars Is Getting The Axe

Scion's not selling many of these cars, so it has to go.

Let's be honest, it was only a matter of time until Scion started to cross some vehicles off of its list, but we didn't expect it to happen this early. The polarizing Scion xB is on the chopping block and will no longer be on sale by the end of the year. The xB has been through two generation changes and was a major hit with new drivers, as well as the older crowd. The first generation xB was the brand's flagship vehicle and ushered in a new era of versatile, boxy cars.

We were never fans of the xB but respect the vehicle for being the original box on wheels that offered enthusiasts a vast selection of modifications. With its distinct styling, Scion rode a wave of momentum on the xB's back in 2003 but saw sales drop off to just 16,583 units last year. The xB isn't the first vehicle to get axed from Scion as the automaker attempts to renew its lineup as well as itself. The xB follows other boxy competitors like the Nissan Cube and Honda Element out the door, which begs the questions: Are boxy cars done for good? 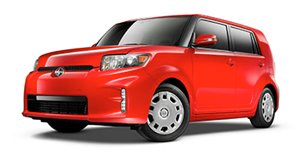