Here's something you don't see everyday: a Pagani Zonda Tricolore for sale in Saudi Arabia.

If you're looking for a supercar with an intoxicating blend of Italian style and performance, the Pagani Zonda is hard to beat. It's easily one of the most desirable cars of this generation, which is why it frequently appears in car calendars and on bedroom posters. Just over 100 of them were made in total, though, so for most people it will remain just that: a fantasy. Apart from some one-off specials, the Tricolore is the rarest in the entire range.

Made in 2010 in tribute to the National Aerobatic Team to celebrate the 50th anniversary of the "Frecce Tricolori", only three were produced, one of which is currently for sale in Saudi Arabia at high-end dealership, Seven Car Lounge. This Tricolori is the second model made out of the three, and can be distinguished by its blue and grey carbon elements, gold wheels, and blue brake calipers. The interior is just as lavish, with a scintillating blend of gloss carbon fiber, aluminum and white and blue leather seats, making it one of the most intricate interiors we've ever seen.

Being a Zonda, the Tricolore will satisfy your need for speed. Its Mercedes-Benz 7.3-liter, mid-mounted V12 engine delivers 678 hp, which is complimented with Pagani's 6-speed sequential transmission allowing the Tricolore to reach 0-62 mph in just 3.4 seconds and go on to a top speed of 220 mph. Unsurprisingly, no price has been listed for this supercar rarity. Anyone want to hazard a guess how much this Zonda Tricolore will go for? The country's official Pagani dealer is NahwaSharq under its ultra-luxury vehicles division: The Premium Collection, in case there's a particular Pagani you are after. 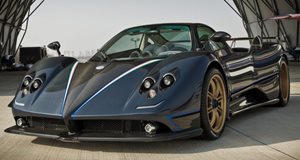