This is the real deal. Bring your checkbooks.

Finally, the story of Steve McQueen's Mustang from the movie Bullitt is reaching the point where it goes up for sale publicly. The 1968 Ford Mustang GT Fastback will be auctioned at Mecum's 2020 Kissimmee auction in January. The announcement was made by Dana Mecum, who also said he expects the icon to surpass the $3.5 million American muscle car record that's currently held by a 1971 Plymouth Hemi Cuda convertible that was sold at Mecum's 2014 Seattle auction.

There was actually a pair of Mustangs used for the movie, and the 'jumper' used for the car chase stunts showed up out of the blue a few years ago. The car going up for sale is the actual 'hero' car McQueen drove in Bullitt, and then tried to purchase a couple of times after the movie had wrapped. It showed up in 2018 when Ford revealed a Buillit edition of the modern Mustang and showed the real thing alongside it.

Sean Kiernan, the son of the man that bought the car and who ignored McQueen's pleas to sell it to him, reportedly first started playing with the idea of selling it two years ago. He spoke to McKeel Hagerty and Dana Mecum about selling the car and paid attention to their advice but, understandably, he's been in no hurry to sell his father's car which has been kept in its original condition.

The big question now is all about how much it will sell for in January 2020. Nobody can answer that, and anyone that says they can make an educated guess is lying. There's simply no benchmark for an automotive and cultural icon like this going up for auction. It will all boil down to what someone is willing to pay, and if there is a bidding war then all hell could break loose.

At the time of writing, the most expensive car sold at auction was a Ferrari 250 GTO that went for $48 million. Our best guess is somewhere between the $3.5 million Hemi Cuda and that. What's yours?

Trucks
Expect The Ford Maverick To Look Like This

Video
BMW Explains Why New M3 And M4 Are So Special 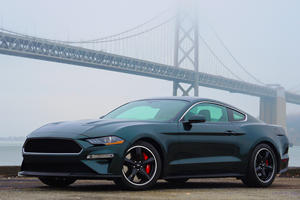