Don't have a dealership near you? Just wait.

Those in the market for a new Polestar 2 (or a last-minute Polestar 1) but would like to see one in the metal before buying could be in luck. You see, the Swedish performance all-electric brand is still pretty new and lags behind in dealerships. That's now changing. Polestar has just announced plans to open 15 new dealers across the country by the end of this year.

In the first six months of 2021, new showrooms called Polestar Spaces will open in the following major areas: Austin, Texas, Boston, Denver, Seattle, South Florida, and Washington D.C. The automaker adds it will be partnering with other "established retail groups" to guarantee the best possible customer experience for sales and service.

In the second half of the year, additional showrooms will open in Atlanta, Central and South New Jersey, Connecticut, Dallas, Detroit, Minneapolis, Phoenix, and Orange County, California. At present, Polestar has showrooms in Los Angeles, Manhattan, and two in the San Francisco Bay Area. This will give Polestar a coast-to-coast presence and we expect more showrooms will open in the not too distant future. The automaker further says additional expansion-related announcements are coming later this year and that at-home test drives are already available. Customers can also place orders online.

"In 2019 we stated our goal of servicing 85% of the addressable EV market within a year of the Polestar 2 launch," said Gregor Hembrough, Head of Polestar in North America.

"With these 2021 appointments, we will accomplish that and more - especially with our free pickup and delivery servicing within 150 miles of a brick-and-mortar Polestar location." These so-called Polestar Spaces are not the typical dealer showroom, but rather boast luxurious and minimalist Scandinavian interior layouts that are central to the brand's overall design ethos.

Although the Polestar lineup currently consists of just one mainstream model, this won't last for long. The Polestar 3 EV will be a Tesla Model Y SUV rival when it arrives sometime in 2022. Meanwhile, the Polestar 2 is currently on sale and, for a little while longer, so is the Polestar 1. 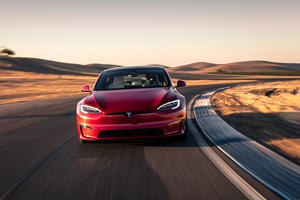