This is the first known sighting of the new RS in America.

Now this is something you don't see every day. Normally, prototype cars are restricted to their country of origin, around Europe or maybe the Nurburgring. There's just a much better-established test bed in Europe for OEMs, which is why we almost never see cars like the Porsche 911 GT3 RS in America ahead of their debut. Sure, some might sneak through to Moab or make an occasional appearance at an auto show, but that's a rare thing.

The new RS car will be anything but a normal street car, but thanks to a TikTok user, we're getting our first look at the track day special by Porsche on American shores. The car was caught casually roaming the streets of California.

So, we busted out our spy shots to compare. Seeing the car at scale in the real world helps. Of course, that also makes the more-than-motorsports-spec rear wing stand out even more. The first seconds of the clip shows a white sedan in traffic in front of the GT3, and the wing comes up to the roof of it, and looks almost wider than the P Car itself. It also keeps the swan neck-style mounting that we saw on this year's GT3.

It looks like the vertical aero vanes we've seen before are still present. It also makes us wonder about the crashworthiness of a car like this. There is absolutely no way to know now, but perhaps some aspects of the GT3 RS will change when the car comes Stateside for one reason or another. It's just too early to call.

However, we'd say evidence of a supposedly unchanged car on American soil is good news. There was never any doubt the car was coming to America, but small regulatory differences can alter a car's appearance rather quickly. We've all seen the ugly bumpers some European cars have when they make it over here. For now, those are mercifully absent.

As ever, we expect a version of Porsche's high-revving flat-six engine (likely the exact same 4.0-liter) mated to a PDK gearbox. We won't be surprised if this is the fastest RS car yet, given the 911 RSR-like Aero, but we'll have to wait for some official lap times to find out. 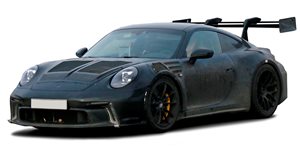 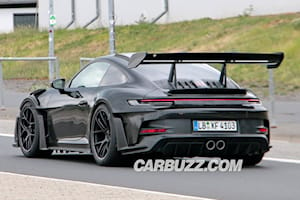