An original Porsche 959 that was once in an accident is now a one-off 959 Speedster.

The Porsche 959 is without question one of the German automaker's all-time greats. It is a butt-engined, twin-turbocharged all-wheel-drive high-performance car that was so good at being awesome that Porsche became convinced that AWD would be a smart thing to offer. Oh yeah, the 959 also competed with the Ferrari F40 back in the day. But just 337 units were built and each one today is worth a boatload. Every single one of them was built as a hard top. What you're looking at now is the exception.

We'll explain: the owner of this white 959 somehow rolled it in an accident. As repair work was about to begin, he opted instead to remove the rest of the presumably partially crushed roof and turn the car into a speedster. Other modifications include a Porsche 911 Speedster windshield, but it's been swapped out in favor of the original glass unit. This 959 reportedly has just over 5,000 miles on its odometer and is up for sale at a dealer in the Netherlands. The cost? About $1.3 million. According to sources, this is not a 959 replica. It's a 1987 model and it's as real as they come - with the exception of its missing roof, of course. 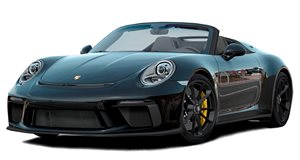