Porsche finally took the wraps off its new Cayenne Turbo Coupe variant. The most powerful SUV ever made by the company will be called the Cayenne Turbo GT and it will deliver 631 hp (90 more than the Cayenne Turbo Coupe) and 626 lb-ft, in increase of 59 lb-ft over the same car. This is the vehicle that smashed the Nurburgring record for SUVs earlier this month, and the one that legendary Porsche driver Walter Rorhl took for a test drive.

It can accelerate to 60 mph in 3.1 seconds and pass the quarter mile at 11.6 seconds. Top speed is 186 mph, which translated to that 'Ring time of 7 minutes, 38.9 seconds with Lars Kern behind the wheel. The Turbo GT trim will only be available in the "coupe" bodystyle.

The Cayenne Turbo GT will sit about an inch lower than the standard Cayenne Turbo Coupe. Porsche says the suspension and the electronically controlled chassis systems were specifically for this vehicle. The three-chamber air suspension is 15% stiffer and the dampers have been retuned as well.

The power steering and rear-axle steering were also revamped, as was the Porsche Dynamic Chassis Control system to reduce body roll and improve turn in. It also sports special high-performance tires created specifically for this application. The new Pirelli P Zero Corsa rubber measures 22 inches but those fronts are an inch wider than the Turbo Coupe. Porsche's ceramic brakes are standard with yellow calipers; high-gloss black calipers are optional. Those rotors measure 17.3 inches in front and 16.1 inches in back. For reference, that's bigger than the dinner plates on the Jeep Grand Cherokee Trailhawk.

The engine has the same basic dimensions as the Cayenne Turbo, a 4.0-liter twin-turbo V8, but it has a new crankshaft, pistons, connecting rods, timing chain and torsional dampers. The eight-speed automatic will offer quicker shifts, says Porsche, while the Porsche Traction Management system has been fitted with a water-cooled transfer case, which further increases the thermal capacity of the drivetrain under high loads. A titanium sport exhaust comes standard saving 40 pounds, but the tailpipes still exit from the center.

A new color called Arctic Gray debuts on the Turbo GT. It also gets a specific front fascia with a new front lip and larger side air intakes. The roof is carbon fiber, lowering the center of gravity while the wheel style is called Neodyme. The upper rear wing features side plates in carbon fiber along with an adaptive rear spoiler that features a two-inch Gurney flap. The rear diffuser cover is also made of carbon.

Inside the Cayenne cabin, buyers will get the latest PCM 6.0 infotainment with integrated Apple Music. We're still waiting on our personalized soundtracks that Porsche told us about, but those are future features. Eight-way sport seats are standard, with space in the back for two passengers with a center console. The multifunction sport steering wheel has a yellow 12-o'clock marker. 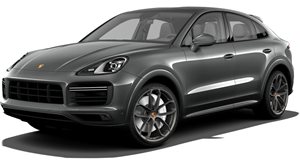 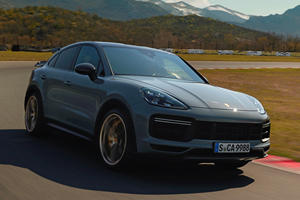 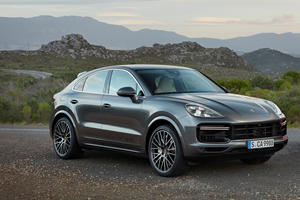