Porsche recently unveiled its new Mission R all-electric racer, boasting two motors with a combined power output of 1,072 hp. A recent development even suggests that it might preview the next-generation 718.

According to Porsche, the Mission R was built to preview an all-new electric racing series that could debut as early as 2025. It will run alongside the existing one-make Carrera Cup series. Porsche also stated that it could deliver similar lap performance to the current 911 GT3 Cup car. But according to an interview with Autocar, the Mission R is more than just a concept.

In the interview, Porsche's head of design may have revealed more than intended. Michael Mauer was asked whether the Mission R was a pure concept car, and he stated that "it's never a pure concept: whenever Porsche does something like this, there's a high degree and level of visibility. So there are some cornerstones, basically, that give orientation." When asked what vehicle elements could be retained on a road-going model, he noted that the air intakes are too oversized for a production car and purely meant for racing, but that items like the headlights and everything from the centre line up could make it to production, likely on the all-electric successor to the Porsche 718.

We know it will be a while before we see an all-electric 911, if at all. But the 911's little brother, the 718, has already undergone significant engine changes and has never been as central to the brand identity. The 718 Cayman is not as iconic as the 911, which means it could catch a grenade for the 911 and go all-electric first.

It's going to hurt, but not as much. And it will give Porsche fans a few years to get used to the idea of an electric sports car.

Before then, however, we're still going to see a hardcore Porsche 718 Cayman GT4 RS, so there's still life in the Cayman as we know it. 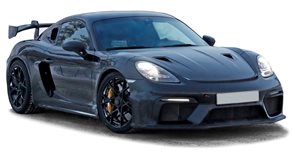