You're potentially looking at the most expensive F50 ever sold.

The Ferrari F40 gets a ton of publicity, even now, and rightfully so. With it's period-correct ('87-'92) styling, screaming 2.9-liter V8 and low production numbers, it's one of the coolest Prancing Horses the company has ever produced. But it's next world beater, the Ferrari F50, was faster, more powerful and its numbers were even more limited than the '80s icon. It won't be as fast as the new 812 Competizione A, but that's already sold out. Later this month, this F50 is up for sale at Amelia Island.

The Ferrari F50 was an early 50th anniversary celebration for the Italian carmaker. It's styling came from the Ferrari Mythos concept from 1989, which road on a modified Testarossa platform, as well as countless hours spend in the wind tunnel with design house Pininfarina. The Mythos shape stayed, but the F50 got a curvier design with projector headlights, deep intakes in the hood, and a big wing like the F40 that preceded it.

Instead of a 2.9 V8, the F50 got a naturally aspirated 4.7-liter V12, which was related to the company's Formula 1 engine that Alain Prost drove to five victories in the 1990 season, landing him second place in the points standing behind champion Aryton Senna. The 65-degree V12, set just ahead of the rear axle, made 512 hp and 347 lb-ft of torque. That power was fed through a six-speed manual transmission, a rear limited-slip differential and on to the rear wheels. It was 4 seconds faster around Fiorino (Ferrari's test track) than the F40. Brembo brakes brought everything to a halt.

Keeping the F50 right side up were unequal-length double wishbones at all four corners, along with electronically adaptable Bilstein dampers. The F50 had no power steering, and weight was so important that fuel was contained in an aircraft-grade Sekur fuel-tank bag. With a carbon fiber monocoque, the F50 came in at just over 3,000 pounds unladen.

Inside, we're talking bare minimum. The dashboard was a carbon fiber panel with three air vents. It did have heat, but no radio and no air conditioning. It did, however, have a removable targa top. A gated metal shifter sits between the passenger and driver while extra wide door sills make entering and exiting a difficult affair.

This particular car, chassis no. 103992, was just one of 55 earmarked for the American market, with a total production run of just 349 cars. For reference, Ferrari produced more than 1,300 F40 coupes. This is the 48th F50 produced; it rolled out of the factory in Maranello on December 15, 1995 to be delivered to Ferrari North America in Englewood Cliffs, New Jersey.

It was sold to Benny Caiola, whose name you may have heard before. Caiola was friends with Horacio Pagani, of the eponymous brand, and was the inspiration for the Pagani Huayra BC. Caiola reportedly enjoyed his F50, "preferring it over all the other pieces of his vast collection." The Caiola estate sold the vehicle in 2011, showing 4,000 miles from new during 15 years of ownership.

It was bought by a Texas-based collector, who added 1,100 more miles and then gave the F50 its first major engine-out recommended maintenance (after 5,100 miles!?) where it received new gaskets, belts, seats, filters and consumables. It comes with addition maintenance invoices from Ferrari San Antonio.

It's up for sale at the Amelia Island RM Auction and comes with its original owners manuals, service invoices, tool kit, hardtop, two pieces of luggage and photos documenting the major service. It's estimate is between $3.4 and $3.75 million. That sounds about right, as one sold for $3.2 million last year at a Gooding & Co. auction. We'd normally say head over to RM Auctions to make a bid, but if you live in the rarefied air of being able to afford an F50, and are looking for one, you probably already have your paddle. The rest of us will just enjoy the stunning photos. 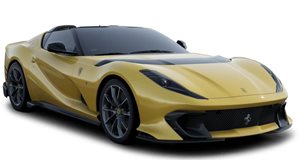