Production-Bound Subaru Ascent Rises To The Occasion In New York

Subaru is changing gears to ride surf of SUV sales to high tide.

Subaru can no longer afford to sit around and let its lineup languish until irrelevance during the SUV craze, offering only beefed-up versions of its signature hatchback body style along with a rallying sedan toned down for duty on the pavement to satisfy increasingly demanding buyers. Especially not after its parent company Fuji Heavy Industries has just changed its name to Subaru Corp, indicating that things have gotten serious. Materializing that new attitude in vehicular form is the new Subaru Ascent Concept.

The Ascent is an upgraded version of the Viziv-7 Concept we recently saw at the 2016 Los Angeles Auto Show. Subaru chose the 2017 New York Auto Show as the stage on which to debut the 3-row full-size SUV to the world and primarily, the SUV-hungry American market. By sticking close to its guns and designing what a forgiving eye can pick out as a large Subaru Outback with more stout lines, the Ascent Concept seems ready to conquer the wilderness without succumbing to the rally racing aspirations of some of its lower trims. It also manages to shed the colored trim lines and overly futuristic hexagonal styling cues from the Viziv-7 Concept that were never going to make it to production anyways.

With a mature look more in line with the design themes on Subaru's current lineup, a name that sounds just as production-ready, and the fact that Subaru debuted the Ascent Concept so quickly after the Viziv-7 Concept, we can gather that the automaker is spending a lot of time and brainpower mulling over the 7-seat SUV segment. While details remain sparse, we do know that it will feature an all-new turbocharged DI boxer engine. The Viziv-7 previously didn't include images of the interior, but now that Subaru is further along in the design process, it's included a glimpse of what the Ascent's guts will look like and suffice it to say, we like where things are going.

With a flowing dashboard and center captain's chairs, the SUV has an strong air of luxury to it, a good thing for a new entrant that's headed for high-stakes competition in an increasingly tight market. The exterior contradicts the cushy insides with masculine fender flares and a large grille that aids the confident and authoritative gaze of the angular headlights. Built on a modified version of Subaru's Global Platform, it has the hardware snuff to back up the sheetmetal puff. Being a production-worthy concept, Subaru has jumped the gun and announced that it will be going into production and on sale, hopefully as is, to Americans in 2018. If your name is Donald Trump, don't worry because the Ascent will be built in Lafayette, Indiana.

You can also read about a small SUV with 3rd row. 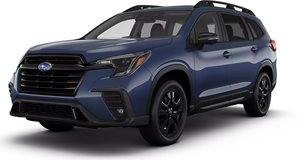