Prowler Gets a Hemi Conversion

A hot rod needs a V8. One owner in New Jersey determined to set the Prowler right by commissioning this one-of-a-kind hot-rodded hot rod.

Lots of automakers make outlandish show cars, but back in the 1990s Chrysler actually built theirs. The Dodge Viper stands as one highly notable example, but for hot-rod fans, it was all about the Plymouth Prowler. First shown as a concept car in 1993, the Prowler was put into production in 1997 with a narrow at the front, wide at the back roadster bodystyle the world hadn't seen since the 1930s. The trouble is that its engine didn't back up its looks, or the hot-rod spirit it evoked. That's where one Trey Byrum comes in.

Determined that the 253-horsepower 3.5-liter V6 and 4-speed Autostick slushbox weren't doing the trick, Byrum installed some new components and even looked into forced induction, but in the end came to the same conclusion reached by enthusiasts since the car's release: the Prowler needs, and deserves, a V8.

And not just any V8, either. Byrum settled for nothing smaller than Chrysler's own 6.1-liter Hemi V8, the same 425-horsepower mill found in the first-gen Challenger and Charger SRT8, but in a vehicle some 1,400 lbs lighter. Of course shoehorning a big block like that into the space designed for an engine closer to half its size proved no simple task. North Carolina-based Performance Innovations was contracted for the job. Everything from the oil pan to the bell housing had to be modified, but the engine fit. Just barely, though. Since the new powerplant didn't quite fit under the lid, the team installed an old-school Mopar-style shaker hood.

Leaving part of the engine poking out the hood also necessitated water drainage in case of rain, and building up the hood around it. The automatic transmission was kept, but the torque converter was upgraded to handle the extra muscle.

Since the National Hot Rod Association limits the performance of convertibles for drag racing, a black hardtop was fitted, and to keep all that power in check, upgraded brakes were installed. From the outside, though, only the shaker hood and the special badges let observers know that this Prowler has the power the car always deserved. That, and the deep howl emitting from the tailpipes. 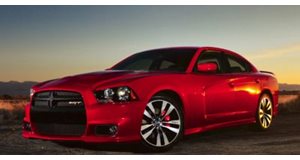