cords Take a Tumble at Pikes Peak and Mt. Washington Jul, 01 2011 Nobuhiro "Monster" Tajima is no stranger to the perilous terrain at Pikes Peak, having previously set the course record at 10:01.408 in 2007. He returned last Sunday and smashed his own record by 10 seconds and surpassed the fabled 10 minute mark. 9:51.278 was all it took for Tajima in his Suzuki SX4 Hill Climb Special to put himself back in the exclusive history books of Pikes Peak.

To handle the 12.4 mile, 156 turn uphill climb he needed all of the 910hp his all-wheel-drive 3.1-liter V6 racer could put out. He also utilized the SX4's relatively light weight. The SX4 weighs just 2,596lbs thanks to its extensive use of carbon fiber body panels. Porsche also set a new record for street-legal cars at Pikes Peak. Jeff Zwart piloted the mostly stock Porsche 911 GT2 RS to a time of 11:07.869. He also placed second in the Time Attack 2-wheel-drive class after Rod Millen in his Hyundai Genesis Coupe racer.

Pikes Peak wasn't the only mountain racing going on this past weekend, as Climb to the Clouds took place on Mount Washington. Dave Higgins obliterated the previous mark on Mount Washington (set by Frank Sprongl in 1998) by 30 seconds, with an overall time of 6:11.54. His Subaru WRX STI rally car actually broke two records, as both his runs were timed under the old record. His first run was only 8 seconds shorter than his new record. The Mount Washington Auto Road combines asphalt and gravel on a snaky 7.6 mile course to the summit at 6,288 feet above sea level. Photos courtesy of usacracing.com. 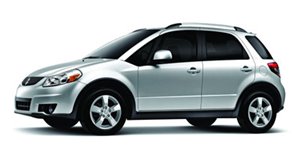