The stuntman owns both cars, so this was his prerogative as a car Youtuber.

The Lamborghini Aventador SVJ is an exclusive $800,000 supercar engineered to go fast and turn heads wherever it goes. It's not the car we'd expect to see used as a prop for a crazy jumping stunt, but then YouTubers are renowned for doing stupid stunts to keep their channel growing.

The real star of this show is the Ram 1500 TRX with its supercharged 6.2-liter Hemi V8 packing 702 horsepower and 650 LB-FT of torque. For this stunt in particular though, Michael Hyssong makes use of the truck's advanced Bilstein Black Hawk e2 shock system which provides 11.8 inches of ground clearance together with a 13-inch front and 14-inch rear suspension travel.

For good measure, he sticks the TRX in Baja mode and takes a run-up to the man-made ramp at 36 mph. With an impressive amount of confidence, he pilots the truck over the SVJ with the rear wheels coming within inches of the roof. Hyssong finds the stunt so fun that he circles around to do it again.

Later in the video, the YouTuber argues that he put the Lamborghini Aventador SVJ up to this task because it has the same orange hue applied to the brake calipers and thought it would look cool. He then expresses his gratitude that the 759-hp supercar made it back to his garage without any damage.

The fact that both the TRX and SVJ made it back without a scratch comes as pleasant news because the YouTuber's previous stunt didn't quite turn out so positive. Last year, he took his Ram 1500 TRX Ignition edition to a rural location in Pennsylvania where he launched it over a creek. This not only resulted in him totaling the TRX but also get in trouble with the local law.

Due to his antics, he was charged with 18 criminal counts by the state's Fish and Boat Commission after an investigation. This included two counts for disturbance of waterways and watersheds, six counts of pollution of waters, six counts of littering, and four counts of misuse of property and waters. The result of this was a rather hefty fine of $53,000. 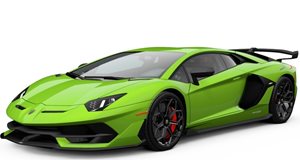