There's plenty of talk about the transition to electric vehicles and how range and charging will be significant issues in the automotive world. While those are absolutely valid and important issues to address, the topic of EV batteries, their replacement, and ultimately their disposal or recycling should be mentioned in the same breath. Battery technology firm Recurrent is all over the issue, and last month it pulled back the curtain on the costs of replacing EVs' batteries.

The company estimates that a battery replacement for a Tesla Model 3 will cost $180/kWh, or around $15,800. While extreme demand for a new car means you're unlikely to find a used Model 3 at that price, a nearly $16,000 replacement bill would be a major portion of a used Tesla's value. Costs are decreasing as EVs become more prevalent and as automakers develop new battery tech, but it will take at least a few more years before they're anywhere near reasonable levels.

Recurrent lists the prices for several other EVs as well, one of which goes above and beyond even Tesla's exorbitant replacement costs. The Volkswagen e-Golf's battery checks in at a whopping $654/kWh, or $23,443, more than a clean used example of the car costs. Others are nearly as bad, such as the BMW i3 at up to $16,000, the Chevy Bolt at up to $16,250, and the Tesla Model S at up to $22,000.

Those costs are insane, but the good news is that Tesla offers a fairly stout warranty for most of its vehicles. All models come with a four-year/50,000-mile basic limited warranty and a five-year/60,000-mile supplemental restraint system warranty. Tesla's batteries are covered for up to eight years and 150,000 miles, depending on the model, and the automaker considers 70 percent capacity retention as the cutoff for replacement. 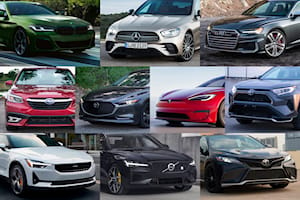 Electric vehicles don't have as many moving mechanical parts as traditional gas vehicles do, so there are fewer parts to break overall. That doesn't mean there aren't wear items, nor does it mean that Teslas are exempt from everyday repairs outside of warranty coverage. YourMechanic estimates a cost of up to $394 for a wheel bearing replacement and up to $851 for a window motor regulator. Those costs are around 20 percent more than repair estimates for a comparable BMW 5 Series, but every mechanic is different.