In all likelihood, Ford will officially unveil the 2013 Shelby GT500 convertible at Detroit next month.

A few months after Ford unveiled the 2013 Shelby GT500 at the Los Angeles Auto Show, word is now going around that the automaker will unveil the convertible version at Detroit next month. Powered by a 5.8-liter V8 with 650hp (oh, how good that sounds) that, according to Ford, is the most powerful V8 in the world. It's a staggering 100hp increase over the current model 5.4-liter V8. Top speed will be over 200 mph; however, we're not certain the upcoming convertible will hit this mark.

We're figuring the coupe will set you back by around $60,000 (the convertible will likely be a bit more), but that's still an incredible bargain considering the power to dollar ratio. And with the Camaro ZL1 Convertible recently being unveiled, it makes complete sense for Ford to choose Detroit as the venue to launch their latest bad ass convertible. And like its coupe sibling, the convertible will feature some mild exterior design updates along with new wheels. We'll be on the lookout for further updates along with official photos. 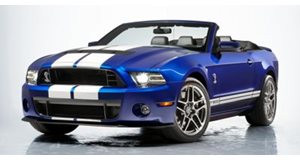