Report: Pagani Calls it Quits on the Zonda F Roadster

The Pagani Zonda has ran its course while the Huayra gets ready to take the reigns as Pagani's featured model.

Pagani has finally decided to call it quits on the Zonda. The innovative Italian automaker has produced the last of its 25-run Zonda F Roadster models and they expect the Huayra to take its place. Built for a customer in the Ukraine, the carbon-fiber-finished-in-purple Zonda F Roadster Final runs on a 7.3-liter AMG V-12 engine that can put out 650hp. The interior is features a questionable choice of pink and purple.

As the last of the Zonda's, we fondly remember it for its eye-popping debut at the Geneva Motor Show in 2006 and were even further impressed with Pagani's masterpiece when it set the lap record on the Nurburgring. Driven by Marc Basseng, its time of 7:24.44 in August 2008 beat the Ferrari Enzo by a second, also driven by Basseng. As mentioned earlier, the Zonda will be replaced by the Huayra, a supercar equipped with a twin-turbocharged 6.0-liter AMG V12 engine that can put out over 700hp and 738 lb-ft. The powerful motor is coupled to a 7-speed Traverse sequential transmission.

It can run from 0-62mph in 3.2 seconds and reach a top speed of over 230mph. So we say farewell to the Pagani Zonda and wait with bated breath as the Huayra gets ready to launch in 2013. 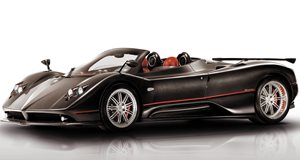