Is the Rolls-Royce Cullinan not wide or flashy enough for you?

We have some good news. German automotive specialist DMC recently took the wraps off its Cullinan-based model, the Emperor. It ticks both boxes. To be fair, we've seen a few Cullinans that are much less tasteful than this.

DMC keeps the front mostly standard, opting only for a lightweight carbon fiber hood. On the side, you'll notice carbon fiber wheel arches that are 1.6 inches wider and side skirts that have been redesigned to calm the airflow down the flanks of the Rolls. The rear features an elongated spoiler lip and a revised rear apron.

On the inside, DMC uses high-gloss polished lacquer surfaces and a full leather interior in Cherry Red. The DMC lettering can be found on the seats and floor mats. DMC does not provide a standard features list as it depends entirely on the donor car. The Cullinan is available with various interior options, including a set of tailgate-mounted seats called the Viewing Suite.

The Emperor runs on 24-inch forged alloy wheels made for DMC by PUR Wheels in Canada. The wheels are approved for a higher top speed and a higher load rating. DMC recommends high-performance 295/30R24 tires on both axles to get the most out of the updated engine.

To up the power, DMC adds a sports exhaust and fettles with the engine management system.

We're more interested in what a Cullinan with a sports exhaust sounds like. The famous 6.75 twin-turbo V12 was designed to provide low-end grunt instead of blistering performance. In the standard car, the engine sound is a distant rumble and hardly indistinguishable from the rear seats.

We've heard a straight-piped Phantom before and the noise it made was far from pleasing. 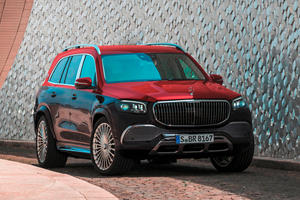