The new IS F would build on the IS 500's already impressive numbers.

The Lexus IS is the carmaker's last opportunity to hold onto a place in the sports sedan market. The Japanese firm has tamed down or killed its other cars - looking at you, GS - and the IS regained a V8 for 2022, so there's one car for Lexus to play with. A new rumor from Japanese site Spyder 7 claims that Lexus is working on a new IS F, which would take the performance of the IS 500 to the next level.

Lexus released the IS500 last year, featuring a 5.0-liter V8 with 472 horsepower and 395 lb-ft of torque. It's got an 8-speed automatic transmission and rear-wheel drive. The rumored IS F will get a slight power bump of around 20 hp but will carry the same 5.0-liter engine.

The render's hood features a prominent power bulge with an air scoop, and the roof is made of carbon fiber. The car's overall look is not that much different from the current IS500, so if it does become a reality, the IS F is unlikely to be a complete departure from the car we see today.

We've seen several F Sport variants in the Lexus lineup in recent years, including the RX, the RC, the IS, the GS, and many more. The original IS F debuted in 2007 and lasted several years. The F featured a 5.0-liter V8. It got 416 hp and 371 lb-ft of torque and a two-stage intake system. The car's engine oil system and transmission were designed for cornering at high speeds, and the IS F clocked 0-60 mph in 4.4 seconds when it was new.

Rumors of a new IS F are exciting, but it's best to temper expectations. Lexus has moved away from V8 engines in most of its other vehicles, including the LX, and the LC is unlikely to get a high-performance F variant. That said, the IS 500 gets us 80% of the way to a full-fat F car, so it's not like Lexus has a long way to go.

The IS F is apparently due to arrive in Japan in October 2022. If that happens, a United States release likely won't be far behind. In regards to pricing, the current IS 500 F Sport Performance starts at around $58,000, and the Performance Premium model starts at a little over $62,000. A new IS F variant would outprice both of those cars and could stretch the MSRP as high as $70,000. 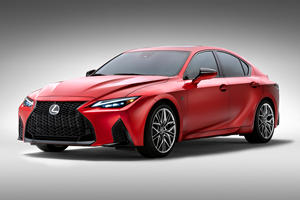