It's even got a monster V8 engine.

Comparing any vehicle, especially one from a relatively unestablished Russian brand, to a Rolls-Royce is a fool's errand. Despite this, Russian automaker Aurus has already attempted to challenge Rolls-Royce with a luxury limo called the Senat. There's no way the Senat could ever measure up to a $450,000 Rolls-Royce Phantom, but with a price tag of 10 million rubles (around $150,000 USD), it doesn't really need to.

Our spy photographers have just captured images of yet another Rolls-Royce knock off called the Aurus Komendant testing in Northern Sweden. This new model is an SUV targeted at the Rolls-Royce Cullinan and simply based on the spy shots, it looks pretty awesome.

There is very little chance the Komendant will measure up to the Cullinan but it does boast some pretty impressive specifications. It will be powered by an in-house 4.4-liter twin-turbo V8 with an electric motor mated to a nine-speed automatic transmission going out to all-wheel-drive. This is the same drivetrain found in the Senat and should develop an impressive 598 horsepower and 649 lb-ft of torque in the Komendant. Aurus is even rumored to be working on a 6.6-liter V12, though there is no word on when it will arrive. It may just be a coincidence, but 4.4-liters and 6.6-liters are the same displacements BMW uses on its V8 and V12 engines.

The Komendant is set to go on sale in Russia in late 2020 or early 2021 and it will join the Senat limo and Arsenal minivan in the company's lineup. Even with camouflaging, we can see the Komendant shares most of its styling cues with the Senat. The front grille is clearly Rolls-Royce inspired and even the wheel design is identical to its sedan counterpart. As with all of the other Aurus models, there is no chance the Komendant will ever be offered in the US market. 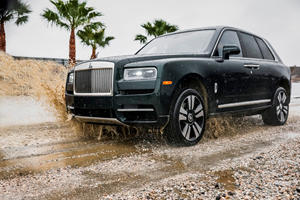