Russia's Desperate Plan To Increase Car Sales May Not Work

A sluggish economy has its pitfalls. Dah.

The Russian economy has certainly seen better days. Though it's not about to crash, the Russian government is not about to take any chances on the matter. One way to help boost the economy is to increase new car sales. Problem is, when the economy was already slow, the average consumer isn't about to go out and buy a new car. A new government program hopes to change that but there's no guarantee for success. According to Reuters, the Russian government has approved a $78.3 billion plan (about 5 billion rubles) to take effect next year on new car loan subsidies. The question is whether or not it'll work.

According to reports, new car sales in Russia dropped by 2.2 percent this year. Last month alone, sales were down by 5.2 percent. Basically, if you live in Russia the government will be offering free money towards the purchase of a new car. Sounds pretty good, right? In the immediate short-term, yes, but in the long run there could be problems.

You see, Russia still owes the banks money from earlier lending support programs. Not so surprisingly, the country's industries and trade minister, Denis Manturov, provided no specific details. Russia is super-secretive about its debts. And this is why the new government spending program to boost new vehicle sales may not work at all. Compensating banks for lowering interest rates isn't exactly cheap. Combined with the already slow economy and fewer people with disposable incomes, there's simply no guarantee Russians will take advantage of a subsidized new car loan.

International automakers, such as Ford and Volkswagen, have been concerned over the past several months about Russia's slow-moving new car sales market, so they will no doubt be monitoring the new program's results (or lack thereof) very carefully. GM quit the Russian market back in 2015.

What's also interesting is that the best-selling cars in Russia are also Russian-made. According to Rus Auto News, top-sellers in Russia in the first six months of this year were a couple of Ladas, followed by the Kia Rio. The Volkswagen Polo and Tiguan, Toyota Camry and RAV4, Kia Sportage and Optima all made the top 20.

The Reuters report does not state whether these loans are only for Russian-built passenger cars, but given the troubling state of new car sales in general, chances are the government will be happy if sales increase no matter what. 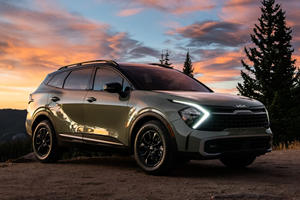