German tuner is ready to showcase a modified BMW 6 Series Gran Coupe and 3 Series Touring at the 2013 Geneva Motor Show.

BMW tuning specialist AC Schnitzer will showcase its wares at next week's Geneva Motor Show on a couple of copper-colored Bimmers. To whet our appetite, the German tuning outfit has revealed a glut of pictures of the touched-up 6 Series Gran Coupe and 3 Series Touring wagon (both equipped with the M-Technik sport packages), but has left us to decipher what changes it has made to the cars' exterior and interior.

More detailed information will doubtless be announced at the Swiss show, but from the images it can be seen AC Schnitzer has given the 6 Series Gran Coupe a new carbon-fiber lip spoiler, headlamp accents and a chrome-plated lower grille. At the back we can see a new carbon-fiber diffuser housing a redesigned exhaust, while the tuner has also added two-tone alloys. Changes to the 3 Series Touring include a two-piece front spoiler, a chrome lower front grille, a painted rear diffuser with new tailpipes and five-spoke alloys. Inside, AC Schnitzer has fitted its own knob for the i-Drive system as well as some bespoke mats and aluminum pedals. 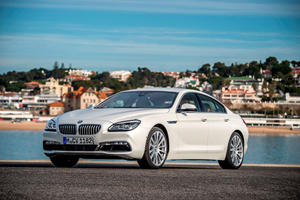