Toyota has something that's just great for those avid off-road enthusiasts, and it's at the 2010 SEMA Show. Toy's Four Wheel Magazine 4Runner Backcountry concept is part of the lineup this year and is said to have been built as a "self-contained exploration rig." It's not much visually, but the stock suspension has been replaced by heavy-duty Old Manu Emu parts. New springs and shock absorbers are used along with a 2.5 inch lift, perfect for rough terrain.

It didn't stop there. Falken Wildpeak A/T tires are wrapped around Teflon-coated ATX Mojave wheels. These give this SUV another half an inch of ride height. Complete with EVO Manufacturing rock sliders, the Backcountry is 3-inches taller than its standard sibling. Inside, a complete array of communication and navigational instruments have been integrated into the cabin. Nicely arranged in factory switch blanks, there's no clutter or lost space. The 4Runner has never looked so good. 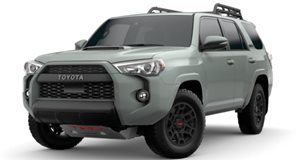 Video
This C8 Chevy Corvette Thinks It's A Cadillac