The Ford Granada with CCX guts is more intimidating than the Nissan Juke-R.

Nissan's Juke-R combined the GT-R's twin-turbo V6 and the body of a Juke for a ridiculously powerful ride in a very pedestrian suit. The Ford Granada with Koenigsegg CCX insides follows in the same guise as a supercar-killing sleeper. Built by Joel W. Olsen from Norway, the Ford Granada has been fitted with a 1,700hp 4.7-liter twin-turbocharged Ford V8 straight from the Koenigsegg CCX. An independent rear suspension has been fitted from a 2003 Ford Mustang Cobra to help the rear tires.

A set of bigger Porsche brakes help the Granada handle all that power. Olsen calls his project the "Norwegian Zzz...Zzz Granada" and says the "driveability is like a Corolla." That is quite the statement. Check out the first start-up of the work in progress below. 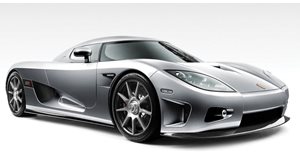