Some 2019 Chevy Silverado Models Are Less Efficient Than Before

It seems like one step forward and two steps back.

The Chevrolet Silverado has been completely redesigned for 2019 and as with all new models, Chevy claims that improvements have been made across the board. That is, however, except for one area, fuel economy. Whereas most rivals claim both an increase in power and an increase in efficiency, we took a look at the fueleconomy.gov figures for the latest Silverados and they seem to be thirstier than before.

Auto writer, Bozi Tatarevic was the first to point this anomaly out on his Twitter account. As an example, the 4.3-liter V6 in rear-wheel-drive form now offers a 17 mpg combined average as opposed to the 2018 models 20 mpg figure.

The same trend can be seen with the 5.3-liter V8. It used to be able to return a combined 19 mpg in RWD trim but now offers the same 17 mpg as the V6 powerplant, basically negating the usually lower consumption figures achieved by smaller capacity engines.

This makes the 4.3-liter V6 a worthwhile option only from a lower initial purchase price point of view and the same results can be seen when looking at the all-wheel-drive variants. Both V6 and V8 engines are essentially carry-overs from the previous range although they have been reprofiled to make slightly more power than before.

A spokesman from Chevrolet, Monte Doran, stated that the new trucks were both larger and more capable than before, "We increased towing capacity, payload, and it's a much larger bed and a much larger cab," he said. The larger frontal area means more drag and this is the primary reason for the increased consumption figures. Even the significantly lower curb weights of the 2019 trucks do not seem to make the kind of difference you would expect here.

Still, most truck customers are not going to quibble over a few mpg when the rest of the package is as big an improvement as it is over the outgoing model. 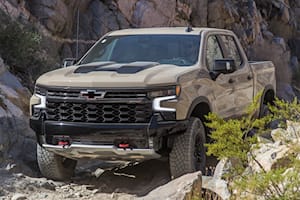